If you’re looking to find the difference between the toaster oven and a microwave, you might be slightly confused about which each one does, then you have come to the right place! With this information, you’ll learn how each one works and how each one handles different key features. By the end, you’ll know everything there is to know to help make sure you get the right one to meet your needs.

How Does A Toaster Oven Work?

Essentially, a toaster oven is an oven and a microwave combined and it can do just about anything that either of those things can do. Additionally, you’re going to find that the toaster oven does have browning properties so that it can brown and toast the food you put in there unlike a microwave.

Some of toaster ovens such as Hamilton Beach 22708 Toastation come with a toaster on top and an oven on the bottom. This toaster oven also allows you to choose your favorite toast shades from six toast shading settings. Breville BOV450XL Mini Smart Oven is also one of the best toaster ovens in that it is smart enough to adjust its heat distribution for perfect results.

How Does A Microwave Work?

A microwave is a lot different than a toaster oven in some ways and shares a lot of the same properties in other ways. For example, the microwave is going to allow you to warm up food or cook food with little to no effort at all. However, it is going to significantly lack when it comes to making the food crispy or toasting it. 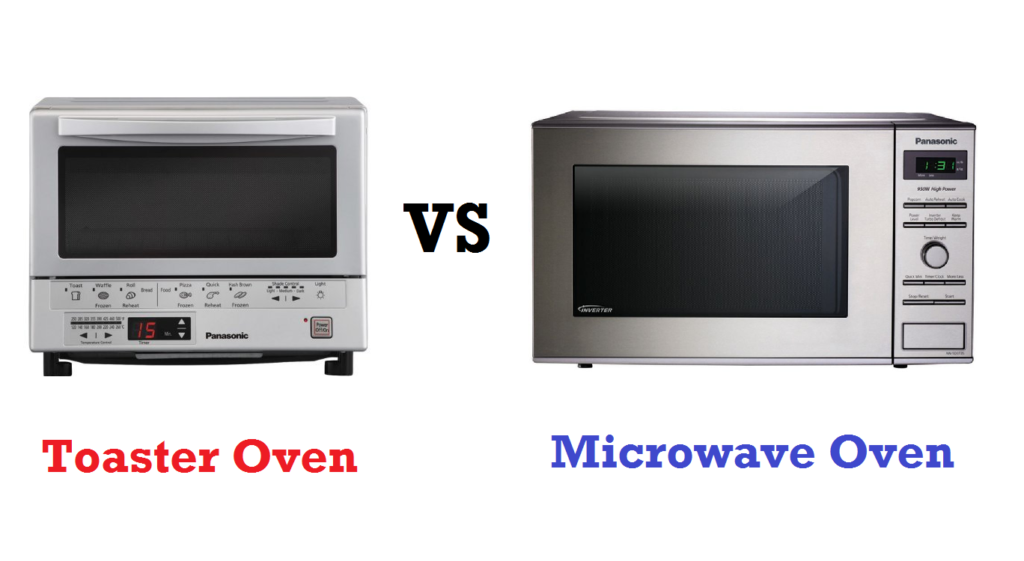 When it comes to energy, you’ll find that the microwave has the edge here but not buy much. On average, a microwave uses about a third of the energy of a standard conventional oven while a toaster oven uses half the energy. In the end, both are much more energy efficient than a conventional oven but when it comes to choosing between the two, the difference is marginal.

Once again, this is going to be another win for the toaster oven because crisping is something that just has not been able to be figured out in a microwave. Not only will you enjoy the browning feature that helps to crisps up food, but the broiling feature crisps up everything in a healthy manner.

This is a tough one to consider because the capacity on the microwave and the toaster oven varies depending on the size you buy. In general, you may find that a microwave oven is going to do a better job if you’re working with food that have a long cook time but overall, the choice is up to you because both will hold enough food.

As you may have guessed, the heating time is somewhat comparable but it will depend on what you are heating up. The microwave can heat some foods faster but i can also make some food tougher. Heat distribution in an over will take longer but it also allows for more even cooking. A toaster oven can help to make your baked potatoes soft and fluffy on the inside compared to hard and chewy.

Both toaster ovens and microwaves come in various price points and it is going to depend on what you are looking for to determine how much you are going to spend on the product. On average, you’ll find that they are somewhat comparable in price but a toaster oven is a little bit cheaper.

Typically, you’re going to find that whatever you cook in a microwave, you can cook in a toaster oven and vice versa. However, it is going to depend on the results you want as to which one you are going to choose. The toaster oven can do a better job with larger foods that you want crispy while the microwave is quick and easier.

This is going to depend on what food you are warming because both of them can do a good job. If you closely monitor your food, a microwave will do a fine job but if you want to brown or crisp your food when warming, then a toaster oven is the way to go.

A toaster oven is going to be considerably lighter when compared to a microwave and it is typically much easier to use. The toaster oven is also going to take up a lot less counter space and it will not require as much free space around it in order to work.

As you can see, there are distinct differences when it comes to a microwave and a toaster oven and you should consider all of the points mentioned above to help make sure you get the one you want. If you’re looking for one that can do just about everything as well as brown and toast, then the toaster oven is the choice for you.

One response to “Toaster Oven vs. Microwave Oven”